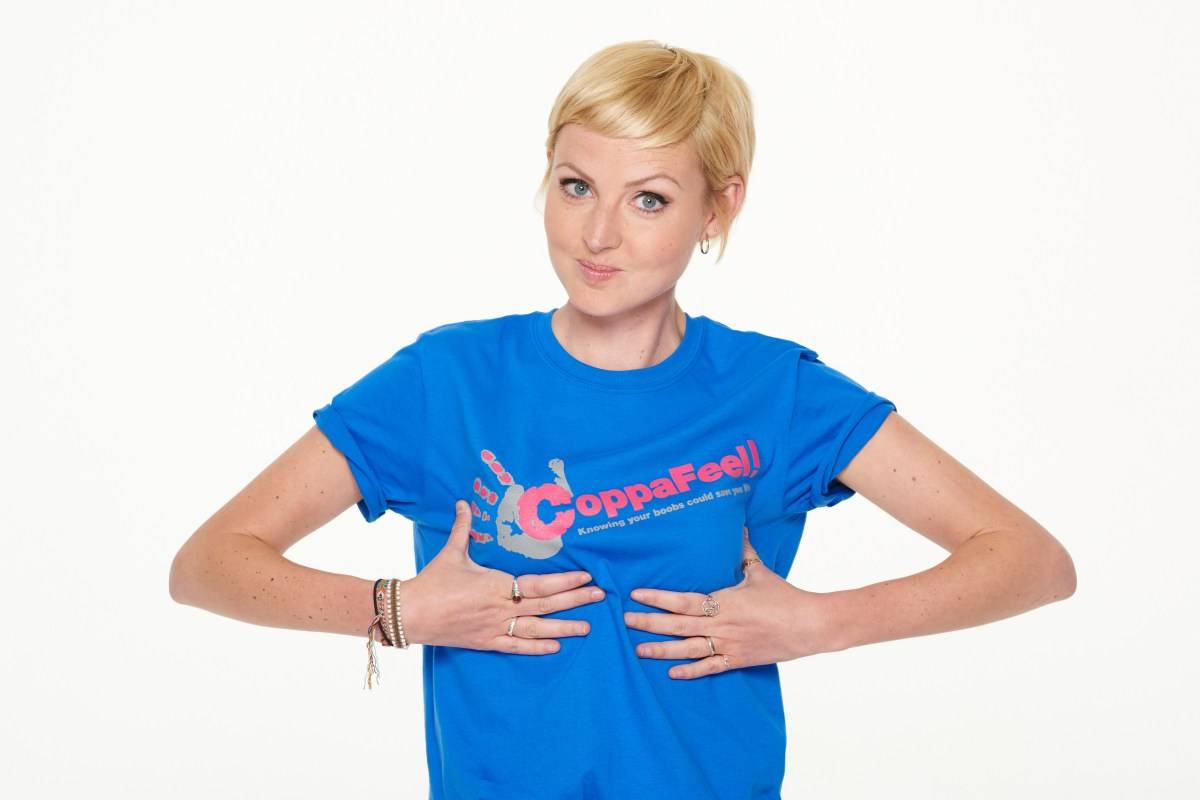 Kris Hallenga can sum up what has become her life’s mission in a few short sentences:

“I had never been told to check my boobs or anything about the disease when I was in school, and what if I had? Would it have made any difference, and would I have been checking myself and picked up on the symptoms sooner? I like to think so, and that it would have made a massive difference in my prognosis. Maybe I wouldn’t still have cancer now.”

This phenomenal young woman was diagnosed with stage lV breast cancer at the age of 23. Stage lV meaning that her cancer had spread beyond just breast tissue. She also had it in her spine.

Hmm. The dreaded Not me! statement. How many of us have said or thought that? Well, Kris is here to change that dialogue, especially for younger women.

Within just a month of her diagnosis, which is amazing in itself, she established Coppafeel, an organization focused on the education and empowerment of young women. No one was teaching young people about breast cancer, self-examining, or what to look for.

“I wasn’t sure what it would end up being, but after some research and a couple of festivals in the summer where we’d just talk to young people in a field about their breasts, we thought it’s probably best that we were a charity. More than anything, to be able to raise money to keep doing what we’re doing and have some credibility.”

Kris was given 2.5 years to live at the time of her diagnosis, but now, almost eleven years later, Coppafeel is raising approximately $2,000,000.00/year. Those funds go toward education programs in schools and workplaces, and providing reminders such as regular text messages to get checking and shower stickers listing the signs and symptoms of breast cancer. And their face-to-face delivery is done by a cadre of ambassadors called Boobettes, all of whom have had cancer under the age of 35 and can tell their own anecdotal stories. They also attend festivals (festifeels) every summer in a big boob van. Yes, you read that correctly – a boob van. Love it!

One of the many things that impresses me about this organization and Kris’s work is the fact that they have also fought hard to get cancer education included in school curriculum. After years of campaigning and fighting to meet the right people, that is now happening.

“It makes so much sense for young people to learn those life lessons at an age when that kind of stuff can stick – before we learn a lot of fear associated with cancer. And knowing that they [students] have been given a much better chance of survival is what it’s all about. It’s about the fact that it is now curable and not something that has be with you for life. But the thing is, you have to catch it early, and you have the power to make sure that happens.”

To date, Kris’s own cancer journey, like those of so many others, has been challenging at best. Since initially having spread to her spine, it has since made its way to her hips, pelvis, liver, and most recently, her brain. Last year alone, she had 54 tumors successfully treated with very targeted radiotherapy. Regardless, she remains optimistic and positive even though her disease remains incurable.

“I just wish I knew of other people like me, and if I’d known when I was first diagnosed that people lived this long with this disease, I think it would have given me so much hope. I guess that’s one of the reasons that I continue to share my story and try and educate people as much as possible. Knowing that someone is out there still very much alive 11 years later, I think is very good to hear when you’re feeling so, so hopeless.”

Her own previous reference to the disease was in film and movies, none of which spoke to her own experience following diagnosis.

“It’s usually someone dies or they get the all clear. What about the people in the middle, or people who aren’t being told that they are going to survive but aren’t dying yet, either? Where do we fit in? So I’m out there trying to educate people about me and the fact that it’s possible to live with this disease in a relatively normal way.”

And thank God she is! When my best friend was diagnosed with stage lV breast cancer years ago, she was given 6 months to live and lived almost four years, and believe me, those first 6 months for her were hell. When she made it past that projected expiration date, she had a new lease on life, so let’s all, like Kris, celebrate possibility and taking one day at a time.

Kris’s work with Coppafeel is literally saving lives. Let’s honor her by copping our own feel today, kicking this disease to the curb.

You can hear Kris’s extremely important interview HERE, or by tuning into iHeart Radio, Apple Podcasts, Google Podcasts, Stitcher, Spotify, or wherever your favorite podcasts are playing.