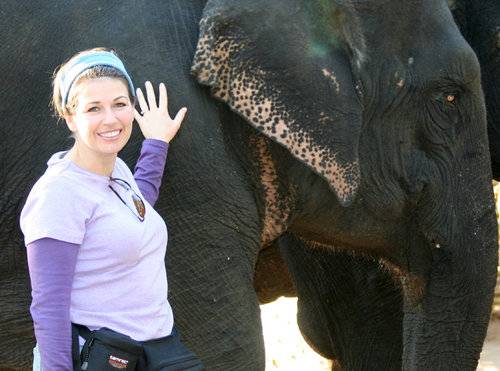 Katy Yocom, my guest this week on Girlfriend, We Need To Talk, brought such joy talking about one of my favorite topics: writing! She’s author of Three Ways To Disappear, a debut novel that won the Siskiyou Prize for environmental literature and got picked as a top indie favorite by Barnes and Noble.

All of this from a girl who had originally wanted to be a zookeeper. Magically, her path led to journalism instead.

“It kind of presented itself,” she told me, which led to a true love of language.

Journalism then presented a number of other opportunities, including an interview with Sena Jeter Naslund, author of Ahab’s Wife. Sena came across as a regular person, so Katy figured if regular people could write books, maybe she could too. BAM! Talk about pivotal moments. This one led to an MFA and a rewarding journey to novel completion.

As for the book, Katy was always intrigued by big cats, and she’d been majorly influenced by the film Born Free. But it wasn’t until a tigress at her local zoo gave birth to a litter of cubs that her idea fully evolved, and it would change her world forever.

The story centers around a woman who travels to India to work in tiger conservation. As you can well imagine, this story required some serious research. Some of which took place in India, thanks, in part, to a grant from the Elizabeth George Foundation. It’s there that the true plight of the tiger became realized. There are fewer than 4,000 wild tigers left in the world today, and they may be on their way out if something isn’t done to help. Katy’s story intertwines their threat of extinction with the bonds of a family who struggle in the lingering fallout of tragedy. It’s a page-turning and heartfelt read from beginning to end.

“Sometimes you’re the last one to understand what you’re doing.”

What a killer quote! Creatives often speak of pieces calling to them, a process in which one looks back later with a genuine, Oh, now I get it. And again, with writing as a favorite topic, we discussed process and a shared belief that it’s never too late to write that book that’s calling to you.

“There’s really something to be said for coming to writing somewhere in the middle of your life, or really anywhere in your life, but the longer you’ve lived, the more experience you have, the more insights into the world, and into what it means to be a human being.”

SO true! It’s like our own version of continual research. The richer our experiences, the richer the manuscript.

“There are plenty of young writers out there with raw talent, but the experience of having lived is equally important. I’m all about writers coming to it at whatever age it becomes possible.”

And there you have it. If you want to learn more about becoming a writer at any age, contact the School of Creative and Professional Writing at Spalding University where Katy is Associate Director. She can be contacted directly at kyocom@spalding.edu.

And pick up this book! You will not be disappointed.

You can listen to Katy’s interview on iHeart Radio, Apple Podcasts, Google Podcasts, Stitcher, Spotify, or by clicking right HERE.