Every Monarch Deserves A Long And Joyous Reign

I moved to San Antonio from Canada in 1997, and I can distinctly remember my initial awe at witnessing a sky full of monarch butterflies. I was confused by the site initially, having seen monarchs all my life in southern Ontario, but I’d been naive regarding their life cycle and migration patterns. Not only did I not expect to see them in Texas, but the vast number of them astounded me. Hundreds, more like thousands, working their way across six and eight lanes of aggressive Texas traffic. It was a jaw dropping.

‘But all the way from Canada to Mexico?’ I asked myself. Yep – all that way. A trip that few would make by car.

I had occasion this week to take a road trip through central and eastern Texas, and I got a glorious reminder of my first autumn in San Antonio. There they were again. Pockets of monarchs struggling their way through 75 mph traffic. Not even close to the number I remember seeing seventeen years ago, which saddens me, but enough that every few minutes I’d cringe at the thought of hitting one. I hit two, and I mourned. The rest, which seemed to fly right about windshield level, got caught up in the air current and whipped over the top of the car into safety. I suppose this phenomenon occurs, because they weigh – ah – nothing whatsoever. 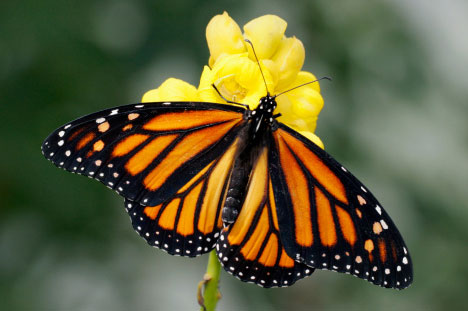 I admire, respect and truly love these blossoms of nature – and I’m grateful for them. Grateful for the reminder to appreciate beauty and to keep repeating our own version of flap, flap, flap, flap, glide. Sure, some of us will hit obstacles on the way to our destinations, but most will arrive simply by staying the course.

How can we help these little treasures replenish their numbers and continue their inspiration? It’s simple, really. I urge you all, especially those in the north, to watch this video and provide our butterflies with a much needed place to rest – and reign: VIDEO