Blow Up Your TV

I don’t pretend to have all the answers, not by a long shot, but I have managed to figure out a thing or two about what works for me. A lot of trial and error has gone into this “figuring out” business, but one thing became pretty clear early on: I can’t stand television.

When I first heard John Prine’s song, “Spanish Pipedream,” in the 90s (it was released in 1971), I hollered a resounding “Yes!”

“Blow up your TV,” he warbled. “Throw away your paper.” 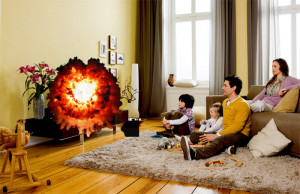 It made so much sense. Not the part about moving to the country and raising kids on peaches, but . . .

Even then I wanted to disconnect from our idiot box. It grated on my last nerve.

Yes, I do own a television and generally pick a particular series on Netflix, watching one episode a day until it’s done, so I’ll never blast the thing to smithereens; I just hate the overall cultural effect. I mean, TVs are now creeping their way into public restrooms and elevators, and the last thing I want to see on an elevator on vacation is CNN sensationalizing the latest “protect yourself from” disaster.

I’ll stop the tirade, and share, instead, my top ten reasons why I think it’s beneficial to leave the damned thing turned off:

1)  It saves a ton of money. Don’t get me started on the price of cable, and think of all the cash there’d be on hand with less exposure to advertisers.

2)  Conversations become a source of entertainment and genuine connection. 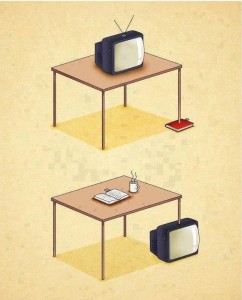 3)  More reading takes place, and there aren’t any commercials between chapters.

4)  Self-confidence increases when we’re not spending several hours a day comparing ourselves to perfect looking people.

5)  Those who are even the least bit creative will create more, and/or finally find time to learn to paint, write, dance, play guitar, whatever.

6)  Less time gets wasted, and we’re only allotted so much.

7)  Not being part of the status quo makes people nervous. Ha! Couldn’t resist that one.

8 )  More exercise takes place, because just lying there on the sofa is downright boring.

9)  Less fear. Have you noticed that even the seemingly benign Weather Channel has a show called, “It Could Happen Tomorrow?” Really??

10) We can live out our own cool realities instead of spending time watching others live out their dysfunctional ones.

I’ll never get cable again; not unless they eventually let us purchase individual channels, not that I see that coming anytime soon. And I didn’t ditch cable because of some song I heard. I ditched it for all ten of the reasons above, and because I spent more time looking for something good to watch than actually watching anything at all.

I remember it being scary disconnecting and no longer contributing to the water cooler conversations at work. “What do you mean you haven’t watched it?” All worth it, my friends. Now I connect with people through much more meaningful topics.

Oh, and here’s the song, in case you’re interested. 🙂

This blog is also available at www.leanadelle.com