The Stuff That Moves Me

The movers arrived in Ottawa a few weeks ago, and I watched their comings and goings from my sofa until they kicked me off of it. I’ve moved umpteen times in my life, so I pretty much have the process down to a science. The things I always take in the car with me include: an inflatable bed with linen, towels, CD player, toilet paper, a few knives and forks, clothes, two pairs of shoes, some tools, and a small cooler for water and snacks. When everything else gets moved out, I have just what I need to get by on.

I think that presents the obvious question, don’t you? If that’s all I need to get by on, why in hell did I have so many boxes to go on the truck? 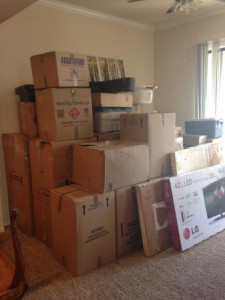 I do purge during my moves – both at the start, and at the destination – but it doesn’t seem to cut down on much. I wonder what I’d really miss if – God forbid – the moving van went off the road into a ravine. Probably not a lot, although I’ll admit to have jonesed for my couch more than once this time around. Just something comfortable to sit on. I’d never want to give up my guitar, my pictures or my laptop, but the rest of it . . . I think I’d get by without just fine. 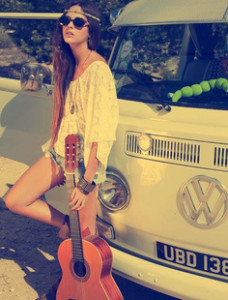 When I was a teenager, I fantasized about living out of VW van on a beach in California (same dream every kid had in the 70s). I’d don a leather band around my hair and have a golden retriever named Aura at my feet. Everything I’d need could be stored in the back of that van, and I’d want for nothing.

I still dream that dream in my mind, and I relive a little piece of it every time I head out on one of my lengthy road trips. Mind you, I no longer want to sleep in the van. I just want to sit on the tailgate and sing before pulling in to a Marriott Courtyard, but I’ll always possess a bit of gypsy longing.

Alas, my accumulation dilemma. Stock pile it, throw it in cardboard, tape it up, then unpack the unsightly mess and try to find room for it all. Once it’s put away behind closed closet doors it can be ignored again, although my junk drawer already needs going through, and I’ve lived here two weeks. <sigh>

I think it’s good once in a while to see all of your stuff piled in one room in boxes. It makes you think twice, if nothing else, and thinking more than once is kind of what moving’s all about.