Ever Have One Of Those Days?

You know those days. Sun’s shining, but all seems black. The news is nothing but accidents and carnage. The vet calls wanting more money that you don’t already have. You can’t zip up your jeans without lying on the floor and using pliers. Nothing seems appealing except drowning your sorrows in a glass of wine and watching repeated episodes of “Orange Is The New Black” in an attempt to prove to yourself that things could be a lot worse (and they most certainly could).

Such was my day today, which led me to ponder . . . obstacles. 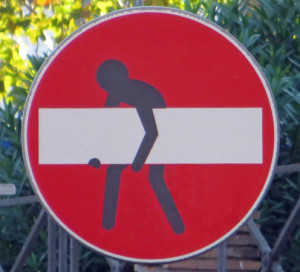 I took the above picture recently of an actual street sign. I love the whole concept of “What do you mean I can’t go there? Who says it’s off limits? Here’s what I think of your damned, stupid limitations.” Creative. Brilliant!

I’m torn. I like to think that obstacles are tests that measure our fortitude and determination; that how we move forward with each rough day determines how we’ll handle the next – and how much we grow. It could be that obstacles are just a reality of living and that nothing weighs in the balance of handling them well or not.

Fact is, we’re going to keep running into them. That’s a given. As we’re tootin’ along on the road of life, these glaring annoyances are going to continue popping up in our headlights. 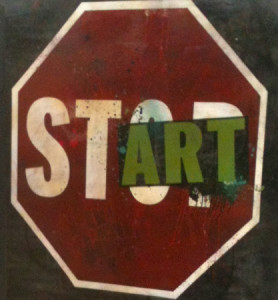 Ever reach an intersection at two in the morning and get a red light? Ever look around at the fact that you’re the lone car on the road and think how stupid it is to be sitting there stopped when there’s no chance in hell that anything’s going to happen if you hit the gas? Have you hit the gas? I have, and I pretty much intend to keep doing so . . .

. . . tomorrow, that is, after tonight’s marathon of episodes eight through eleven and a chilled glass of Chardonnay.