You know the guy. The one who sits down beside you on a plane and doesn’t stop talking? Yeah, I spent two hours with him yesterday. Initially I wanted to scream, having planned to sleep during my early morning flight, but the conversation proved interesting.

We covered a lot of ground together (literally as well as figuratively), and I left with a nugget of a quote – one for the reactionaries among us who suffer from seemingly involuntary knee-jerks when things spill out of our control:

“DON’T JUST DO SOMETHING; SIT THERE!”

It’s nothing short of brilliant! Maybe you’ve heard it before, but I hadn’t, and I now plan to practice it at the first sign of trouble.

And is it just me, or are the reactionaries among us proliferating? Impatience – everywhere – and I’ve had enough!

Okay, all joking aside, short fuses now seem like the rule instead of the exception, with no one having tolerance for anything or anybody else. Maybe it’s because our culture is obsessed with instant gratification. Or it might be our steady decline in values. Perhaps even the highly contagious spread of apathy among Westerners. Whatever the reason, I’m a firm believer that we all just need to chill, which is why I love this quote, SO MUCH! 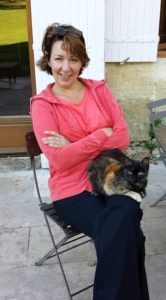 It’s going to happen again, you know. You’re going to be somewhere, and someone is going to piss you off. I firmly believe, however, that we can retrain our blood pressures to be more selective on what shoots them skyward.

I’ll admit that there have a been a few occasions when instantly doing “something” has been the right move, providing the right outcome, but if I’m totally honest, it’s more often been disastrous. That’s why, the next time I get my ire up, I’m going to take a deep breath and sit.

Actually, let’s start a movement: SIT FOR YOUR SANITY!  Yes, it’s an oxymoron – movement and sitting – but don’t let that annoy you.