Getting to Haiti proved to be an effort. While visiting friends in Nashville, I sprained an ankle. Then our initial transfer flight out of Miami got cancelled entirely, which turned into an entire day at the airport, a three hour sleep in a casino, and our second 2:30 a.m. wake-up call in two days, but… 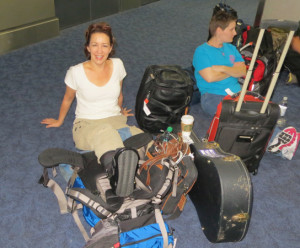 …we did eventually arrive on Friday morning and were whisked off to a scheduled visit at an orphanage. “Whisked” meaning the men were put into the back of a pick-up truck, while the women sat in a caged version of the same. There was a lot of chatter and anticipation on our way there, so I didn’t really absorb much of Port-Au-Prince.

Once on site, the team’s orchestration of setting up unfolded like a page in a pop-up book. In no time at all, we had a fully functioning dental office, doctor’s office, pharmacy, lab, and eye exam station where school rooms and empty corridors had been moments before. Impressive to say the least, and all-in-all we saw 108 children that day, each of whom graced us with the gift of themselves. Despite the atrocious living conditions these kids endure, love and gratitude spilled out of them in the absence of tears. 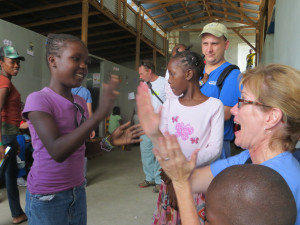 I suppose I suffered from a bit of shock that first day, because it took a while for it to all sink in. I did what I had to do at the orphanage in an almost euphoric state. The trip had been planned for a long time, and I’d made it here. I was helping. Oh, look at me. It wasn’t until the ride back to the hotel that it really hit.

Poverty has taken on a whole new meaning since my arrival here, and – as a result – so has excess (not that I had much use for it before). The roads are in disrepair and resemble plaque filled arteries awaiting an infarct. Cars, trucks, motorcycles, people, dogs, chickens, goats… and honking. My God, the honking – which seems to be as much about saying “Go ahead,” and “Thank-you,” as it is about annoyance. Then there’s the dust from all of this mayhem. It coats the leaves on the trees as high up as ten or twelve feet, and each Haitian wears it like a second skin.

Tent cities – like the one we visited this morning – seem to appear out of nowhere, and the stench of human waste can be overwhelming in the oppressive heat. These makeshift communities are nestled in amongst graffiti covered buildings. Most of those look like they’re on the verge of collapse. The actual “tents” remind me of all that these people have been through: earthquakes, floods, starvation, disease. The fact that we can globally go about our business of consumerism, while allowing human beings around the world to suffer like this, is what brought me to tears that day. Until you see it for yourself, the magnitude is incomprehensible.

I am forever changed by this experience. Not only by the fact that the lives of these people are so destitute, but because the smiles continue. Amidst the suffering, their graffiti professes God’s love, and their eyes light up in the face of kindness. Dust may cover this nation’s people, but it does not coat their spirit in any way. 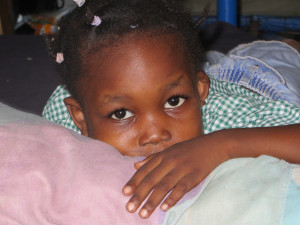