There’s a funny thing that happens with the birth of a new you. I call it “the shift,” which for me is like shedding old skin. It’s an odd feeling, really, that’s not related to seemingly big stuff like changing your address or starting a new relationship. No, this is a sense of no turning back – literally like things will never be the same again. It hasn’t happened often for me, maybe twice, but it’s here again now, and I’m marveled by it. Those of you who know me well know that my life changes as often as Vanna White’s wardrobe, but “the shift” is a different thing entirely.

The infrequency of this occurrence causes recognition to be slow at best, but the pattern eventually makes itself clear. There’s the initial unsteadiness that starts it all off, like a dog sensing an earthquake about to happen. This is followed by a flux of emotion and an odd, but cathartic, mourning period. It was after a good cry last night – about everything and nothing in particular – that I finally absorbed the familiarity of it all.

A few big defining events are about to unfold in my life, which I’ll be sharing in subsequent blogs, and each one of them is going to transform who I’ve been in recent years. It’s an inner knowing that I have about this, and I’m slowly starting to get excited; excitement being the next phase in the pattern (after the mourning).

I’ve never been much of a “mourning” person, so this part’s a challenge for me. I like who I’ve been. It took a lot of time, energy, self-abuse, and plenty of love to get me to this point, and letting go makes me sorrowful. I’ll miss the me I’ve known, very much.

So, it’s with a somewhat heavy heart that I turn my gaze in a new direction and await that oncoming train. Once I’m on it, it’s full steam ahead to what awaits and the shaping of a new incarnation. It’s hard to know what’s down the track, but I can guarantee it won’t be boring. I do hope you’ll all come along for the ride. 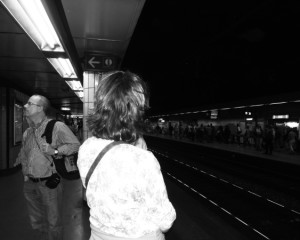