I finally met one of them. You know those guys who build Inukshuks (pronounced In-ook-shook)? They’re random natural sculptures made out of stacked rocks that originated in the Arctic regions of North America. Some, of course, are commissioned and on a large scale (like the one below), but there are endless Inukshuks that just appear out of nowhere. They come in various shapes and sizes and are seen along coast lines, on the sides of roads, along mountain trails, you name it. On more than one occasion, I’ve found myself pondering the question, ‘Who’s making these things?’

I just love them. Maybe because they’re actual guideposts, and I’m all over that. The word Inuckshuk apparently translates to, “In the likeness of a human,” and they were the brainchild of the Inuit. Their traditional meaning is something akin to “Someone’s been here,” or “You’re going in the right direction.” 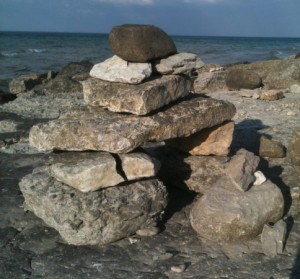 So, on a recent hike near Wakefield, Quebec, and completely by chance, my friend and I crossed paths with an Inuckshuk creator. With the patience of Job, this man builds a variety of these things along the trail that are stunningly beautiful, and he does it on a persistently consistent basis, because someone else has just as powerful an urge to knock them all down. Why is anyone’s guess, but this guy just keeps going out into the woods to rebuild them. I love that! It rocks (pun intended).

And what a great life lesson. Design your own personal mission to create some kind of guidepost for others to help them along their journey, and keep rebuilding if someone tries to knock it down. Just take one stone at a time, choose the pieces that fit together the best, and keep on stackin’. We can all be a source of creativity that inspires. We can each be the one that doesn’t give up.