Brian Roman inspires me. The man embodies joy. He walks it, talks it, and sings it like the collective energy of all things is tickling at his vocal chords. I mean, he believes in what he’s doing, and he knows he’s on the right path.

I met Brian at the 2012 International Elvis Festival in Collingwood, Ontario, Canada where he was playing the part of master-of-ceremonies. Brian introduced the various Elvi (not a typo) throughout the evening and rocked the house with his phenomenal performances between acts. 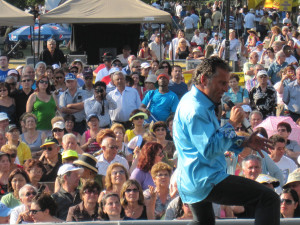 I was struck by how entranced the audience became during his songs, and I just loved his “TA-DA!” style of presentation. A real rat-pack type of persona; a “genuine article” entertainer. But phenomenal performance aside, when Brian told his story between songs, I knew I had to interview him. This is exactly what I try to relay to people. This is what has the potential to happen when you take a leap of faith:

Brian Roman worked as an insurance salesman for years, and he was damned good at it. Had he always wanted to sell insurance? No. He secretly dreamed of being a professional singer, and, typical of those of us who have an inner knowing about what path we should be on, he got constant nudges from the universe to pursue it. 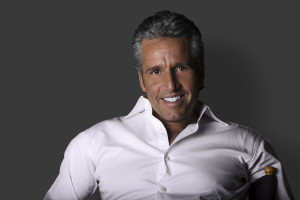 The dream itself took flight in 2005 when he went out on a limb and produced his first CD. When a friend suggested he have a release party (meaning somewhere like the back room of a restaurant), Brian shot back with, “What about Roy Thomson Hall?” Absurd? You betcha.

Roy Thomson Hall is one of Canada’s premier concert facilities in Toronto, Ontario that seats approximately 2,630 people. All the big names perform at Roy Thomson Hall – not no-name insurance salesmen like Brian Roman. But against all odds, he did it.

Brian hired a music director, a 17 piece orchestra, a 150 member choir, and back-up singers, then undertook the massive task of pitching tickets for an unknown act. Did I mention that he was good at sales? He and his posse sold every seat in the house, and the show ended with a standing ovation. The next day his face appeared on the front page of the Toronto Star newspaper and TV and radio pursued him for interviews. 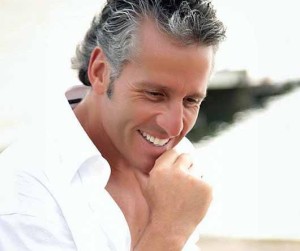 Brian Roman was the little engine that could, and now he’s making tracks for the big time. My suggestion? Buy his latest CD entitled “Dreamer” and play it when you have doubts. Remind yourself that it’s all about following your heart. Believe that it’s all about believing.

Cut and paste this link to enjoy Brian’s video: https://www.youtube.com/watch?feature=player_embedded&v=aH2Q2qSIf5k